The Festival of Friends is pleased to announce that the Hamilton Street Railway will be offering express shuttle service to and from the Ancaster Fairgrounds during the festival weekend.

The shuttle will once again operate from downtown Hamilton and run express to the Ancaster fairgrounds. In a change this year, buses will depart on King Street opposite MacNab Street every twenty minutes at :00, :20, and :40 passed the hour.

Buses will depart the Ancaster Fairgrounds at the north end of the midway at :00, :20, and :40 with the first departure at 2:40 PM on Friday, 12:40 PM on Saturday and Sunday. The final departure for all three nights will will take place at 11:45 PM. Those needing connections to the final 12:00 midnight downtown departures should note that the last departure from Ancaster Fair to connect with the 12:00 midnight HSR routes from downtown is 11:20 PM.

In addition to the stop on King St the shuttle will also stop on Main Street West opposite MacNab to let off passengers. This is a DROP OFF ONLY stop and no passengers will be permitted to board here. 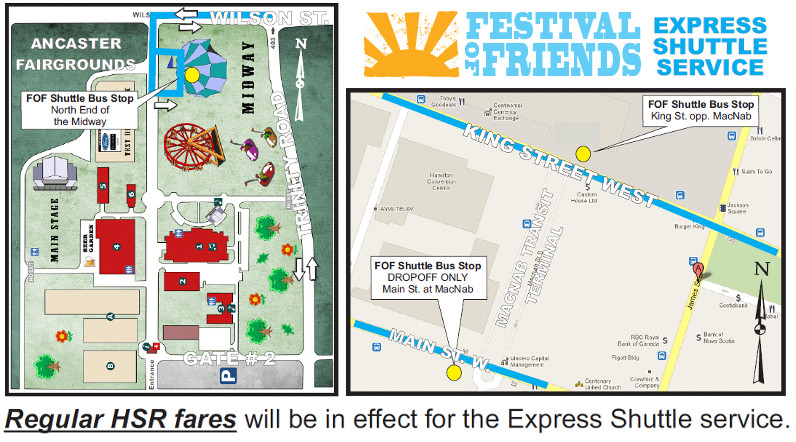 Hello Hamilton! We are thrilled to announce the li

One week today we reveal the headliners to the fir